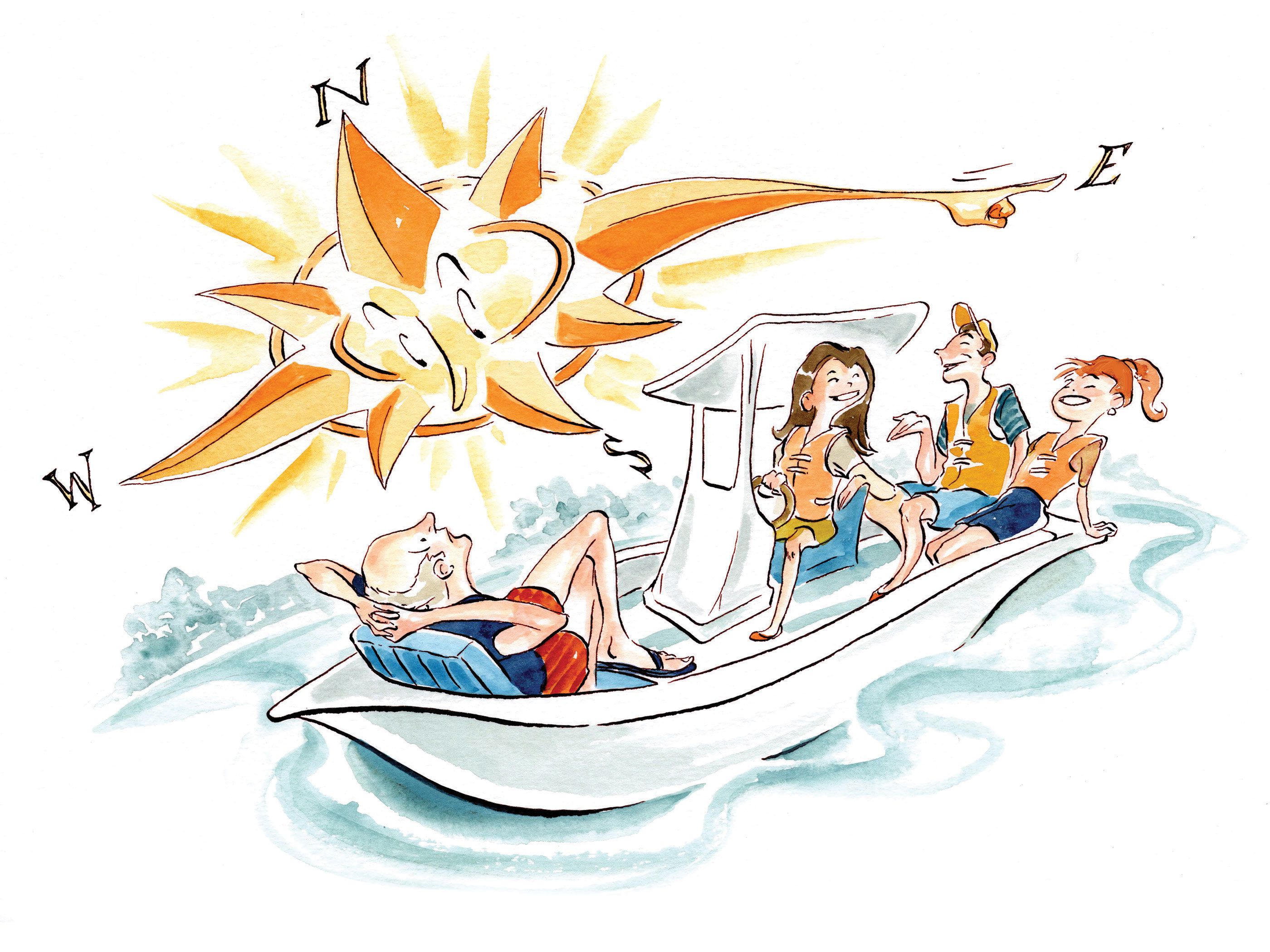 A straight line is the shortest distance between two points, but it might be the least comfortable if seas are rough. Consider a zigzag tacking course, hitting the waves obliquely to lessen pounding. (Tim Bower/)

I’m sitting on the cooler seat of my Regulator one recent morning, about 14 miles south of Shinnecock, on a cloudless August day with just a zephyr of wind and a gentle roll on the sea.

My daughter Keira is running the boat while I’m kicked back and snoozing, resting up for the day of fishing we’d set out on with my other daughter, Margaret, and their friend Jake, rounding out the crew of three teens and me.

So, I’m sitting there, eyes closed, content. Content, that is, until I feel the rising sun’s warmth move from my left ear to my nose.

And in an instant, my left side was being warmed and we were back on course. But we went through this routine a few more times before I finally abandoned any hope of a snooze. I got up, went to the helm, and helped Keira to understand what was going on.

My kids grew up on the boat and are pretty handy with it. Keira was having trouble, in part, for lack of attention due to yucking it up a bit too much with her friend. But the main reason she couldn’t hold a course was the lack of visual cues she was used to inshore—buoys, buildings, markers and bridges make it easy. Point and shoot, as it were. She had no practice steering by the compass or, for that matter, the plotter.

While the electronics show you a course to steer, trying to steer straight by using the boat icon or digital display alone requires a lot more effort and concentration. It’s easier to steer straight if you have something to aim at, using the compass or plotter as a check. Plus, eyes glued to a screen might miss a log, a sea turtle or an adrift piece of cargo net. Often, I’ll set my course and then line up a cloud with the bow, moving to different clouds depending upon their altitude, distance and movement. But this day’s sky was cloudless.

Though the day was calm, there still was enough of a sea to see and feel. I had Keira steer back on course. Then I asked her to note the angle at which the boat was meeting the waves. Steering the boat to maintain that angle would keep us more or less on a straight course. Because prudent navigation relies upon using all aids that are available, I explained to her how I knew she was off course even though I was half-asleep with my eyes closed.

Read Next: Seamanship Lessons From a Yacht Captain

Using the compass and GPS to set our course, and with both the sea and the sun to help her keep that heading, Keira was able to steer a straight course, keep a sharp lookout, and even continue a bit of joking around with her sister and her friend.

Use the cues nature provides to enjoy an easier time at the helm while navigating across open water.