With over 20 miles of beaches and 129 public access points, Miami is all about its waterfront. Marinas line the Miami River and the Intracoastal Waterway. In this area of Florida, you can boat inshore along these waterways or tackle the more open waters of Biscayne Bay or the Atlantic Ocean if you wish.

Boaters raft up every weekend at the Sandbars of Miami for swimming and partying in the Bay. However, suppose that doesn’t suit you. In that case, there are many exciting attractions on the waterway, from north beach to south beach, and beyond.

For those who wish for a more sedate visit to Miami’s waterfront than a party on the Bay does, the sites of Miami are easily accessible by boat. Shopping, dining, and some of the most fantastic architecture in the country grace the city’s waterways.

Find the best place for you to take the boat from the following sites and create a memorable tour of Miami. 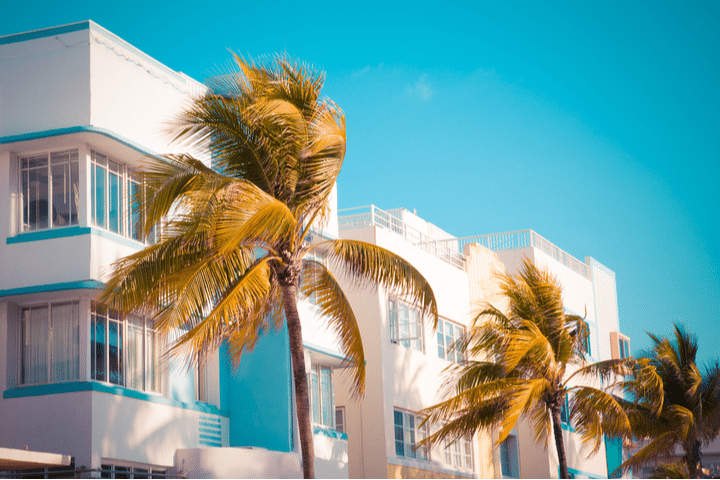 This area of Miami has several names and is called the Miami Art Deco District and the Old Miami Beach Historic District. Whatever name you choose when visiting this area of the city, the word you will most likely attribute to this area of Miami is incredible! Moreover, this is especially so if you have an appreciation for classical architecture.

This area of Miami has 960 historical buildings, with architectural features that range from 1922 to 1968. The centerpiece of this area is the original waterfront subdivision of John Collins— which is situated between Collins Park at 22nd Street and North of 44th Street, where it ends at “Millionaires Row.” The homes here represent the most extensive collection of Art Deco Architecture in the world.

Every property here is within two blocks of the water. From the Atlantic Ocean eastward, Lake Pancoast and the Collins Canal to the south, or Indian Creek to the west, the homes are easily accessible by boat. A few hours of rambling about the Historic District of Miami will take you to a different era. 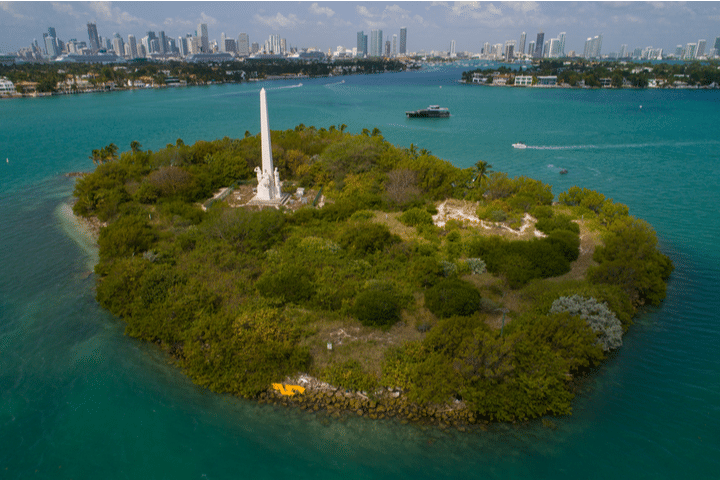 This iconic landmark is situated off South Beach in Biscayne Bay and was built between 1920 and 1921 as a memorial to Henry Flagler. His fortune was used to develop the east coast of Florida. The 110-foot monolith placed in the middle of the central, park-like setting can be seen from afar.

There has been a struggle to maintain the island, as it was constructed with no seawall. As a result, erosion has eaten away at the edges, and Flagler Memorial Island is no longer perfectly round. There has been considerable money spent on keeping it from washing away, and limestone boulders have been placed around the island to slow the wearing away of its shores.

Accessible only by boat, Flagler Memorial Island is worth a stop on your way across the Bay. The central area around the monolith is maintained for those who want to come to the island. In addition, there are picnic tables and trash receptacles. As a historical landmark, a visit to the island is worth the time. 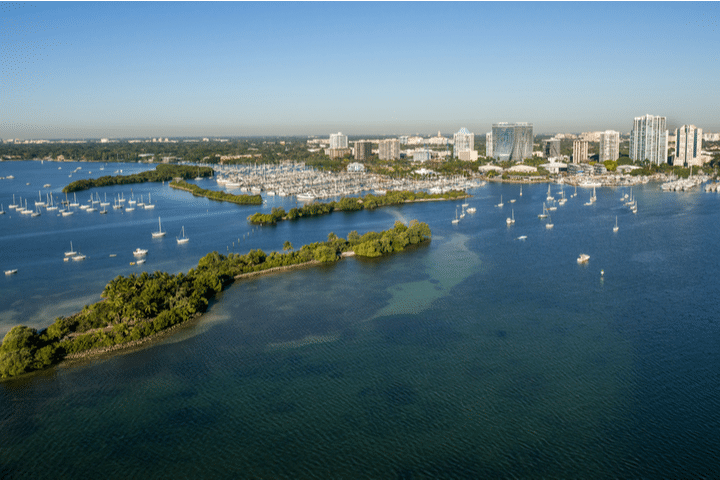 As the oldest inhabited area of Miami, Coconut Grove maintains the eclectic persona of those who founded ‘The Grove’ in 1873. Today, the site that is considered Coconut Grove was created in 1925 when most of Silver Bluff was combined to make one city, ‘The Grove.’

As one of the city’s greenest areas, it still flaunts tropical vegetation. However, the laid-back atmosphere that the founders of Coconut Grove sought and built into the foundations of this area of Miami remains today.

Accessible by boat and worth a visit, Coconut Grove offers dining, shopping, and a unique ambiance for a neighborhood that is so close to the boisterous streets of Miami. If you are boating in Miami, stop in and take a walk through the streets of Coconut Grove. It is one of the best places to boat in Miami, and dockage is readily available. 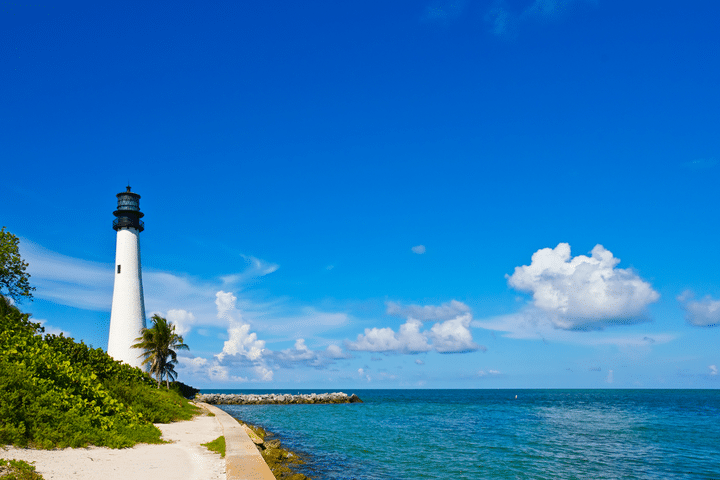 Bracketed by Crandon Park to the north and Bill Baggs Florida State Park to the south, Key Biscayne is home to many. Yet, the surrounding island has maintained much of its natural habitat. Home to the Cape Florida Lighthouse on the most southern shore and Bear Cut sandbar on the north shore of Crandon Park, you could spend days exploring this area of Miami by land and sea.

The area’s natural habitat is home to sea turtles, alligators, osprey, herons, butterflies, rare plants, miles of dunes, and beachfront, unmarred by the site of condominiums, motels, or residences. The natural beauty provided by the two parks framing Key Biscayne makes this area one of the best places to boat in Miami.

Florida has 30 lighthouses that warn sailors of shallow or rocky shores. The Cape Florida lighthouse is one of those and is the oldest structure in Miami-Dade County. Constructed at the southern end of Key Biscayne in 1825, the Cape Florida Lighthouse has stood through storms, erosion, an attack by Native Seminole Indians, and the ravages of time.

It still stands proudly, warning ships of the rocky Florida reef, and is open to visitors. You can climb to the upper balcony that encircles the lighthouse. Your view from this lofty perch will be of the open waters of Biscayne Bay, Miami Beach, the waters of the Atlantic Ocean. The view to the south is of the remains of Stilts Ville, which is another sight to see while exploring the waters of Miami.

If you are a history buff and have an attraction for lighthouses and parks, this is one of the best places to boat in Miami and well worth a look. 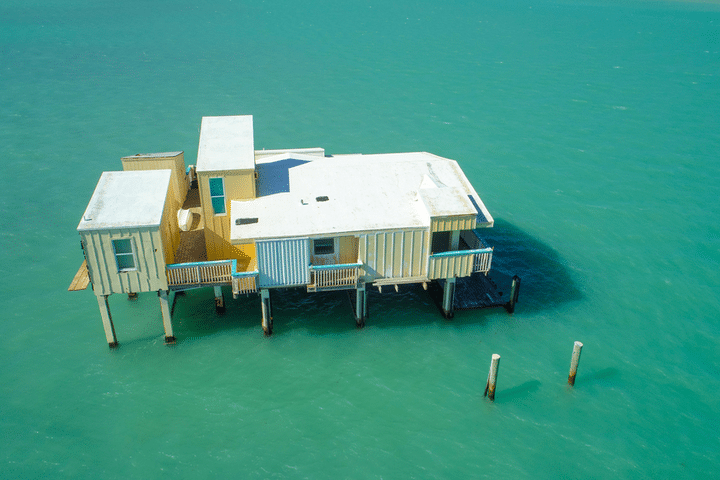 Located at the southern end of Biscayne Bay and a mile south of Cape Florida is Stiltsville. The first of these structures was built a mile offshore, beginning in 1933, by “Crawfish” Eddie Walker. The legend is that the purpose of the offshore buildings was to get around the prohibition and illegal gambling.

None of the original structures remains today. However, seven stilt houses have endured time and tide and are protected by the National Park Service. Accessible by permit only, Stiltsville is a part of Miami’s rich history that can only be reached by boat.

Miami is home to several sandbars, and boaters come from everywhere to visit these venues. So pull up your boat, and swim to cool off, because things can get exciting when everyone meets up at a Miami sandbar. 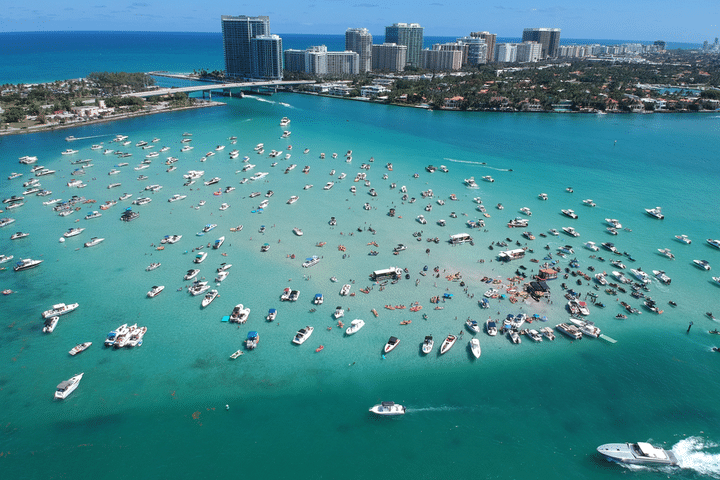 Off the western shore of Key Biscayne is Nixon Beach, and it’s a now you see it, now you don’t, beach and party area. A weekend haunt of local and visiting boaters, hundreds of sun-seekers visit this location every weekend.

Even during the winter, you will find boaters at the Miami Sandbars. Because, in Miami, the sun shines almost every day, no matter the time of year. 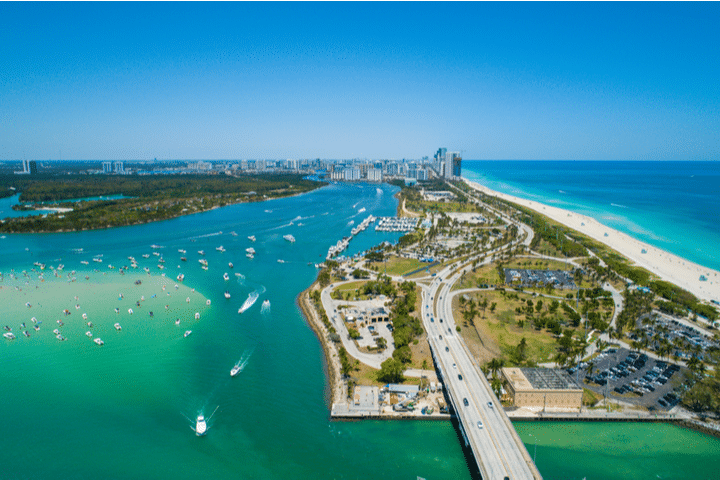 You will find a different group of sun-seekers on this sandbar at high tide, low tide, and every tide in between. Located bayside, north of the Haulover Inlet, this sandbar at the northern end of Biscayne Bay has the same attraction as the Nixon sandbar.

You may float up and have water beneath your keel, and later you’re beached because the tide has gone out. So, be sure you have hours to spare with your Boatsetter rental when planning a trip to one of Miami’s sandbars. 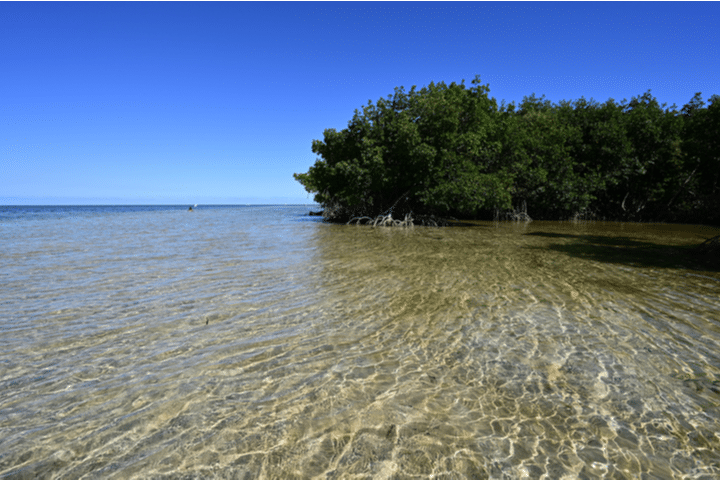 Lying off the northern shore of Key Biscayne, you will find Bear Cut sandbar and beach. Unlike the other two sandbars, Bear cut is not in the middle of the Bay, it is on the south shore of Bear Cut, and like the other sandbars, its appearance depends on the tides.

It is easy to get a Boatsetter rental from Key Biscayne or the mainland to see Bear Cut Sandbar, one of Miami’s best places to boat. So, whether you join the party or merely take in the sights, you must see the Miami sandbars when boating in the area. 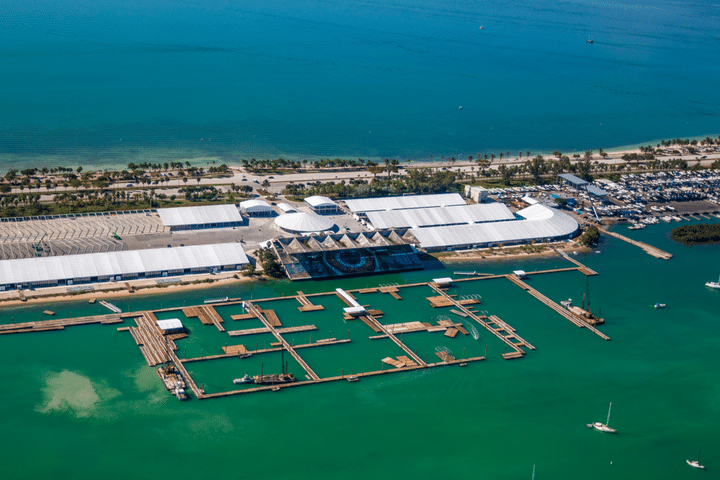 Another of Miami’s historical edifices, the Miami Marine Stadium, was the first Powerboat stadium built in the United States. Located on Virginia Key, south of Miami, in 1963, it was a marvel of engineering and is today.

The stadium seated over 6500 guests and was used for powerboat races of all kinds during its hay day. In addition, the floating stage of this venue hosted many concerts and was the backdrop of an Elvis movie. Declared unsafe by Miami officials in 1992, many efforts have been made to rehabilitate this venue due to damage sustained during hurricane Andrew.

Miami Marine Stadium has been recognized as an architectural masterpiece by the National Trust for Historic Preservation. Efforts are still underway to preserve this site for the enjoyment of future generations. A drive-by of the Miami Marine Stadium while boating on the waters of Miami is worth the time. 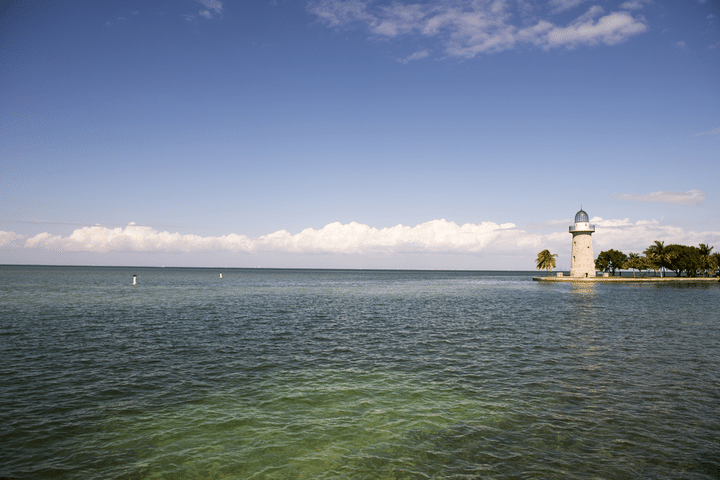 North of the Florida Keys, in southern Biscayne Bay, you will find Boca Chita Key, another of the many islands protected by the National Park Service. At Boca Chita Key, located on the edge of Biscayne National Park, you will find picnic and camping facilities. Dockage is available in the protected cove of the island, or you can anchor off one of the island’s beaches.

Twelve miles south of Key Biscayne, Boca Chita is one of the best places to boat in Miami because it and its surrounding waters are pristine. For nature lovers and those of you that want to go down the road less traveled, a trip to Boca Chita offers natural peace away from the masses.

Visit the Best Places to Boat In Miami

A boat is the best way to see the sights of Miami, and boat owners in Miami will be glad to rent you their boat if you don’t have one. Here at Boatsetter we have one of the largest privately-owned fleets of rental boats in the Miami area.

In addition, you can find rental pontoon boats, ski and wakeboard boats, fishing boats, sailboats, houseboats, and yachts. The boat-rich world of Miami offers every type of boat for rent imaginable.

Whether you want to see the historical sights of Miami, the sandbars of Biscayne Bay, or go offshore for a day of fishing, find the boat you need for the trip with Boatsetter. Captained, or bareboat, you need a boat to see Miami as it should be seen, and that is from the water.

The post Best Places to Boat in Miami appeared first on Boatsetter.