When most think of visiting Tampa, they dream about enjoying the beautiful beaches and the turquoise waters of the Gulf of Mexico. However, many more outdoor recreational opportunities are available for those visiting Southwest Florida, including exploring the many rivers, streams, natural springs, and lakes that flow throughout the area.

What river runs through Tampa?

The Hillsborough River is the river in Florida that runs through the Tampa area. This river starts at the Green Swamp near the juncture for Hillsborough, Pasco, and Polk counties. The river flows approximately 60 miles through Hillsborough and Pasco Counties to Tampa, where it flows through the outlet on the Tampa Bay into the Gulf of Mexico.

What are the four major rivers that make up the Tampa Bay watershed?

Watersheds are areas on the land surface where water flows or has the potential to flow to a common destination. For example, the Old Tampa Bay watershed spans more than 61 miles throughout Pinellas County and consists of 18 named lakes and ponds, 14 named rivers, streams, and canals, plus one named bay.

Four major rivers that make up the Tampa Bay watershed are the Hillsborough, the Alafia, the Little Manatee, and the Manatee rivers. All flow toward the Gulf of Mexico and drain into Tampa Bay.

How many rivers are in Tampa Bay?

There are 68 rivers in Florida, and the Tampa Bay area has six named rivers, most leading out to the Gulf of Mexico and many more unnamed rivers and creeks. The most famous river in the area is the Hillsborough River, which is the perfect place to see wildlife, go canoeing, or spend a relaxing day on a Tampa boat rental.

The Little Manatee River is located in the southeastern area of Hillsborough County and is a popular place to float for hours along the 5.5-mile stretch of river. It is very common to see hardwood hammocks, alligators, great blue herons, white ibis, turtles, river otters, and hawks when out on any river in the Tampa Bay area.

What are the best rivers in the Tampa area to explore?

Visitors love exploring the Little Manatee River, the Alafia River, and the Anclote River when exploring the Tampa Bay waterways. These are three of the best rivers in the area, providing many opportunities for fishing, boating, enjoying water sports, swimming, and relaxing at riverside parks.

What are the best lakes in the Tampa area to enjoy?

There are several small springs and many waterways in the Tampa area. Lake Carroll is the named lake in the Tampa Bay area, offering boaters plenty of opportunities for water sports and wildlife watching.

Are there alligators, crocodiles, or sharks in the Tampa area rivers and lakes?

The waterways running through the Tampa, Florida area mostly have brackish or saltwater depending upon the current tide level. As a result, it is not uncommon to see alligators in lakes, rivers, and at the bay’s mouth.

Many of those who have enjoyed time along any waterway in Southwest Florida have experienced seeing an adult alligator resting on a log, floating in the water, or sunning along the banks of the river or lake.

Florida saltwater crocodiles have been spotted in the Tampa Bay area. However, it is infrequent to see a crocodile, as there is only a small population in this area.

Some sharks can survive and live in freshwater bodies of water, including the Tampa area rivers and estuaries. For example, bull sharks have been spotted in some rivers in the area but mostly stay near the Bay Area or the mouths of the rivers. Other sharks found in the bay and estuaries include blacktip shark, bonnethead shark, great hammerhead shark, nurse shark, tiger shark, and lemon shark. However, it is uncommon for sharks other than bull sharks to stay in the rivers too long.

What type of wildlife is found near Tampa area rivers and lakes? 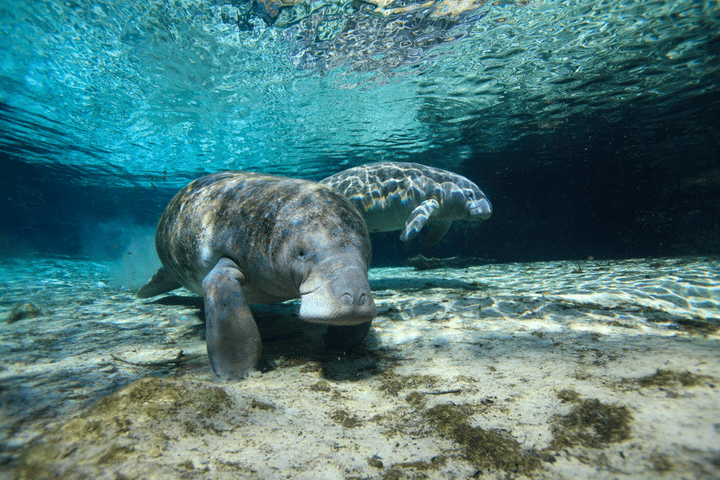 Florida is known for its unique and diverse wildlife, many of which live in and around the Tampa area rivers and lakes. The manatee is a very common animal to see in Florida waterways; it is common to see them close to the Bay Area surfacing every few minutes. However, manatees tend to go further inland in the winter months, searching for warm waters, and can be seen at the Manatee Viewing center north of Apollo Beach.

It is not uncommon to see dolphins swimming and playing through rivers close to the bay. Another water animal to spot in the rivers around Tampa is the tarpon which is often spotted swimming in and around areas near marinas and ports. Other animals found around Tampa area rivers include eastern indigo snakes, bald eagles, bobcats, Sherman’s fox squirrel, reddish egrets, and gopher tortoises.

Is it safe to swim in the Tampa Bay rivers and lakes?

According to the City of Tampa, Florida, it is possible and safe to swim in the Tampa Bay area rivers and lakes. However, there are some swimming rules to follow to help keep you and those swimming with you safely at all times. Those swimming rules include:

Wildlife safety precautions for boating on Tampa rivers and lakes

When traveling along Tampa area rivers, it is essential to ensure you remain safe, especially when encountering wildlife. Most animals are active very early in the morning or around sunset, making these times perfect for viewing wildlife from a distance.

Most of the time, the wildlife stays away at a distance, especially if you remain in the boat. However, if you go ashore, explore the banks of the river, or go swimming, there is a risk of having a close encounter with some Florida wildlife. Here is what to do should you experience a close encounter with local wildlife:

What are popular water activities in Tampa?

The post Rivers & Lakes in Tampa for Boating appeared first on Boatsetter.