Boating in the Tampa Bay area of Florida offers many opportunities for swimming, exploring new beaches, and returning to those you know. There are many islands in this area, too. Some are very large and inhabited by thousands, while others are only a few acres in size.

The two beer can islands of the Tampa Bay area have white sand beaches, but one is in Tampa Bay and is now Pine Key. The other Beer Can Island is on Longboat Key, Florida, about 30 miles south, and has a shoreline on the Gulf of Mexico.

Yes, there are two; Beer can islands, although the Tampa Bay Beer can island owners would like their island to be known as Pine Key from now on. They have petitioned to change the name of this little 11-acre island in Tampa Bay, and Pine Key is fitting. However, locals will likely call it Beer Can Island for years to come.

It was Greer Island in the 1960s but became Beer can Island along the way for the same reason as Pine Key. It was a heavily partied section of Longboat Key, and those who visited often left their beer cans behind.

Read along to learn the way from one island to the next and the kind of boat you need to get there.

A wide swath of sugar sand bordered by aquamarine waters is what you will find at Beer Can Island, Longboat Key, Florida. Accessible from Sarasota Bay and the Gulf of Mexico, this destination offers snorkeling, shell hunting, fishing, swimming, copious amounts of blue sky, and sunshine.

Located at the north end of Longboat Key, Beer Can Island is no longer an island, although it once was. Instead, it is more of a spit, wrapping a tidal lagoon. Recent dredging and improvements placed a wide sugar sand beach facing the Gulf of Mexico. This expansion is about a quarter of a mile long and over 200 feet from the shore to the tree line on the island’s western side.

The history of Beer Can Island, Longboat Key is well documented. It has been a local hangout for boaters and those visiting here for decades. The locals have met the recent improvements to Beer Can Island with mixed emotions.

However, building up the beach and adding breakwaters will keep this spit of land protected from the ravages of time and tide for years to come.

When the tide is low, the sandbar that forms between Beer Can Island and Jewfish Key, a private island, fills with boats of every type. The low tide enables boaters to the beach, and you will see jet skis, pontoon boats, deck boats, large cabin cruisers, and various other floating craft. At that point, this entire section of Sarasota Bay becomes one big party.

That reason alone is a draw to the area and easy access to miles of white sugar sand. When arriving by boat to these islands, you have the option of sunbathing aboard the boat that brought you. Or, can you drop anchor, wade ashore, lay out a towel on the sand, and expand your stake to claim to a section of Beer Can Island for an hour or a few.

Designed to save Beer Can Island from disappearing, the added beach is not readily accessible by land unless you want to walk or go early to get parking. Because the numbers of people here are few, the wide-open spaces give those who visit more privacy than many of the beaches on the Islands, whether you come by land or by water.

It is a private island of approximately 11 acres with a thick stand of upland pine. The island has camping sites, a long white sand beach of the Tike Barge to keep members and guests happy when visiting.

Purchased by a group of investors in 2017, Pine Key has become home to their Tiki Barge and has added members to their ranks in that time. You don’t have to be a member to visit Pine Key because they have guest memberships. So, add this location of your places to visit when plying the waters of Tampa Bay.

Can anyone go to Beer Can Island?

Pine Key is an actual island and is only accessible by boat. It is open to members and guests, who can get a temporary membership. If you are interested in a catered event on the island, you can reach them here, and they can advise you regarding what they have to offer.

However, on Beer Can Island, Longboat Key is accessible on foot or by boat. The best way to see the beaches and islands of Tampa and Sarasota Bays is by boat. It is also the most efficient way to travel to the cities of the Gulf Coast during the winter tourist season.

How do you get to Beer Can Island?

Beer Can Island, Longboat Key is accessible by land and water. Although unfortunately, the location has no public restrooms, parking is limited even though you can get here by car. 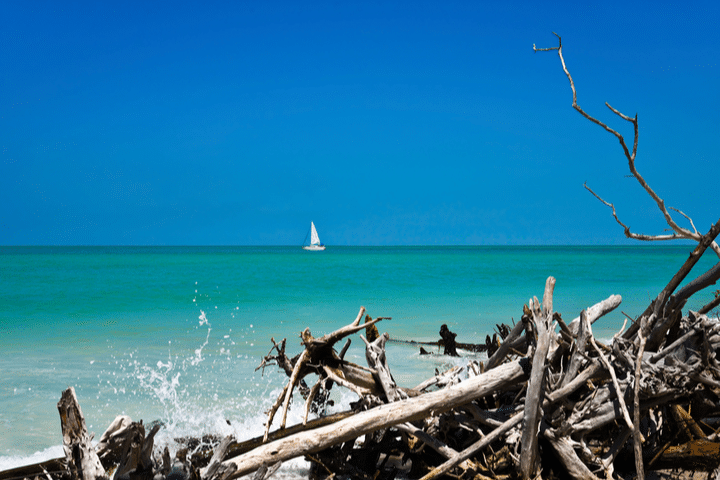 Longboat Key is accessible via Interstate 75, from State Road 64W, or 70W through Bradenton, or from Sarasota, via Ringling Boulevard, along Saint Armand’s Key, then north.

There is minimal street parking along North Shore Road, and be careful where you park, as no parking areas are strictly enforced. Get there early if you want a spot. Many people will park at Coquina Beach on Anna Maria Island and walk across the bridge to Beer Can Island.

Both islands earned their names for the same reason. They have been Florida party locations for decades. Beer Can Island, Longboat Key, was once Greer Island, and high tide cut it off from the main island, as it did to Beer Can Island before the new beach reclamation project.

Pine Key has the same distinction as a party destination. But, as people do, they left enough beer cans behind that the island became named Beer Can Island. The beer cans were the only notable distinction other than a thick stand of pine trees covering a large part of this 11-acre island.

Things to do at Beer Can island

Pine Key has a Tiki Hut barge catering for birthdays, anniversaries, and corporate events. They also have camping spots and are adding to the island’s amenities all the time. Pine Key is open to members and guest members when sunny and warm weather.

However, Beer Can Island, Longboat Key offers snorkeling, shelling, fishing, and on sunny weekends, a sandbar party. People come from all around to enjoy this area’s beautiful water and beaches. There is no membership cost to visit here, and everyone is welcome.