Say ‘cheap boats’ and many people get the wrong impression, because they often think that ‘cheap’ equates to poor quality. That’s too bad because in reality, the most affordable boats on the water today are usually quite well built.

Modern standards are high and although these boats may be very simple and utilitarian, their owners tend to love them. Plus, simple, inexpensive boats are easy to maintain, easy to operate, and have very low operational expenses. On top of all that you can defray what expenses there are—and potentially even make a profit—by allowing other people to rent your boat. But, what constitutes a cheap boat in the first place?

While $10,000 isn’t exactly chump change it’s a tiny sum in the world of boat-buying. So for the purposes of this post, we’ll use that as our price ceiling and stick with looking at boats under 10K (listed alphabetically from A to Z).

Already Own a Boat? Earn an Average of $20K by Renting it Out on Boatsetter 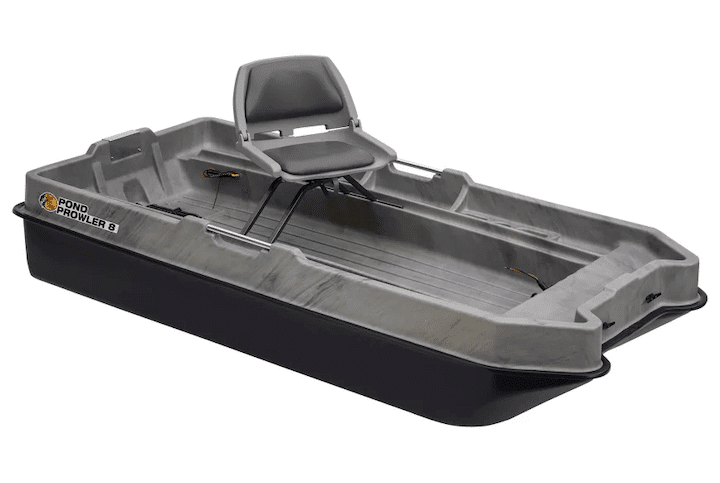 With a list cost of $619.99 this is just about the cheapest boat you’re likely to run across. True, you’ll want to spend $300 or so to get an electric trolling motor and a battery, but for anglers who fish alone on small bodies of water the Bass Pro Shops Pond Prowler 8 will get the job done.

It has a swivel seat, recessed beverage and tackle holders, bow and stern motor mounts, and is pre-wired for electric motors. The polyethylene hull and deck material is virtually indestructible, and with a footprint just eight feet long and four feet wide, you can slide this 100-pound fishing machine right into the back of a pickup truck. 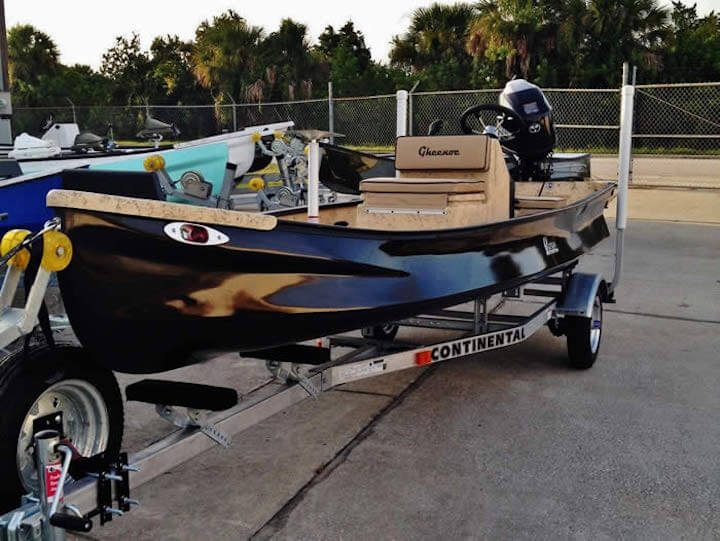 The Gheenoe 16 Super is sort of like a boat crossed with a canoe, with a canoe-like entry that widens aft to a 4’7” beam. That gives it plenty of room for a pair of people, and since these boats are most commonly used for fishing, the 16 Super comes with swiveling pedestal seats, rod holders, and an aerated livewell.

MSRP is $5,400 and a trailer adds another $1,300, so there’s plenty of cash left in the budget for an outboard up to 20 horsepower. Note that this is also one of the few boats in this roundup which can also be rigged with a console (an additional $480) and can be steered with a wheel as opposed to a tiller arm. 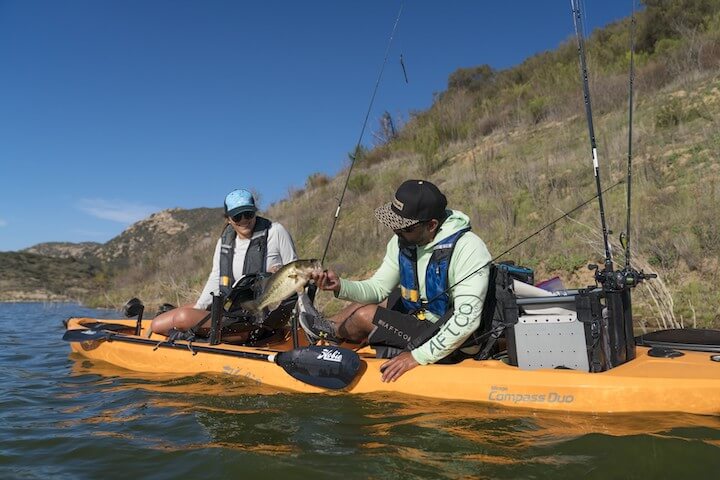 The Hobie Mirage Compass Duo may be svelte with a beam of just under three feet, but its 13’6” length is capable of handling bigger waters than one might imagine. It’s propelled by human power via Hobie’s Mirage Drive pedal-and-fins system and with two people pedaling, can move along at jogging speeds. Plus, since you don’t need to buy a motor this tandem kayak’s list cost of $3,849 is all you’ll need to spend.

The Mirage Compass Duo also comes with four tracks installed so you can add items like fishing rod holders or cupholders to customize the boat as you please. 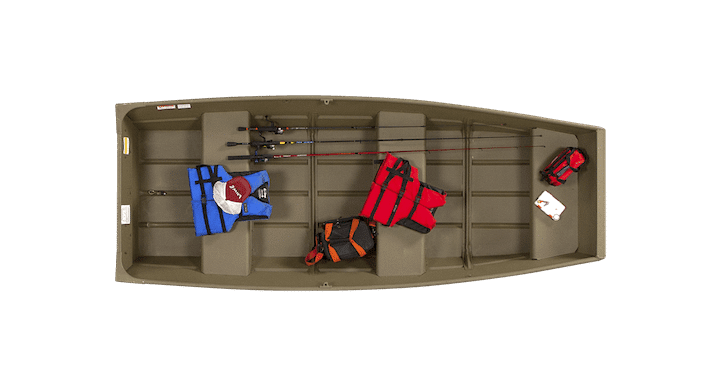 The Lowe 1032 Jon is one of the most affordable boats you’ll ever find, period. True, it’s very small with a length of just 10’3” and a beam of four feet. Capacity is limited to 180 pounds, and maximum power is a mere 3.5 horsepower. But price is off-the-charts affordable with an MSRP of $1,016.

Spend a few hundred dollars for an electric motor or closer to $1,000 for a miniature gas motor, and you can afford to buy an entire fleet without breaking our price ceiling. Wait a sec—what about a trailer? Why bother with one? At 80 pounds it’s easy enough to shove the 1032 into the back of a pick-up, or even on top of a roof rack. 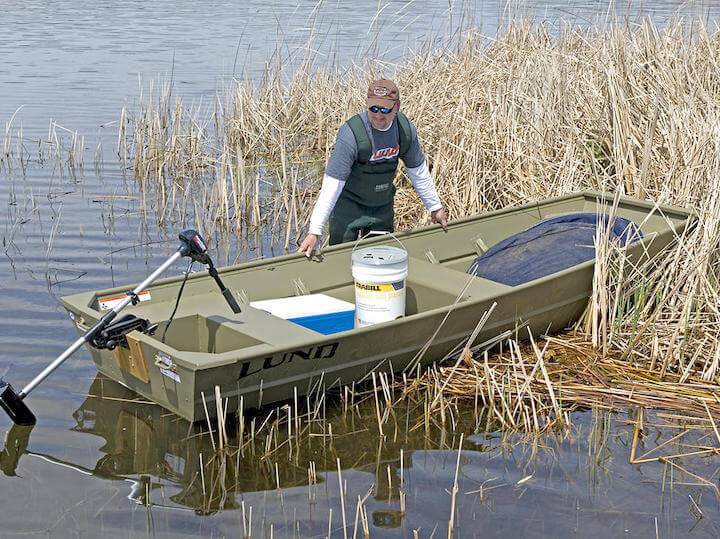 Boatbuilder Lund is known for making aluminum boats of all shapes and sizes, and while they have smaller, even more affordable boats, their 1648 Jon goes for a hair over $3,600 and has a lot of capabilities for the price. Add in a trailer and a 20 horse outboard, and you’ll still be well under the 10K mark while enjoying a roomy 15’9” Jon boat with two bench seats and enough power to cruise at over 20 MPH even with a couple of people aboard.

This boat has a flat bottom design so it’s stable (though it could be a bit bumpy in open waters when the waves kick up), and its light 275-pound weight means that you could also power it with an electric motor for use on small bodies of water.

If a hand-built wooden rowboat appeals to you, the Old Modern Handicrafts Clinker Whitehall Rowboat will be of interest. It shows a $11,810 MSRP on the website, but it’s listed on Amazon for significantly less at $7,703 (or 18 monthly payments of $427.96).

This classic rowboat is built of white pine, red cedar, and plywood, with beech gunwales, and comes with four wood oars plus oarlocks. It has a four-person capacity and is 12’ long by 3’5” wide. 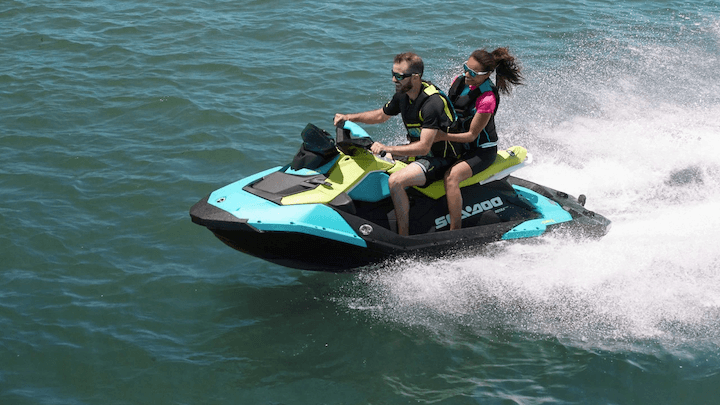 Personal watercrafts count as boats, too, and the Sea-Doo Spark is an eminently affordable PWC. Starting at a $5,699 MSRP the base version blasts across the water’s surface with up to two people aboard. Power comes courtesy of a 60 HP Rotax 900 ACE engine, and the Spark’s Polytec hull is rugged and light.

Pony up another $1,300 and you can get the “3 Up” version, which has seating for three people and boasts an additional 30 horsepower. Both models also have a tow hook so you can pull the kids around the lake on tow-toys. 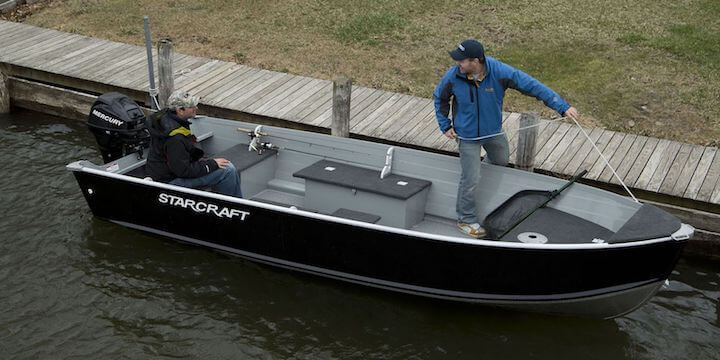 Though its small and inexpensive, the Starcraft 14 SF DLX has quite a lot going for it. It’s V-hull can handle a chop much better than some flat bottom boats, and it comes with lockable stowage compartments, two bench seats, an aerated livewell, and rugged vinyl flooring. It also has more capacity than many of the boats in this roundup, with the ability to haul a crew of four.

Pricing starts at around $5,000 so when you add a trailer and an outboard you’ll come close to the 10K mark, but there should still be enough play in the budget to cover life jackets and some new fishing rods. 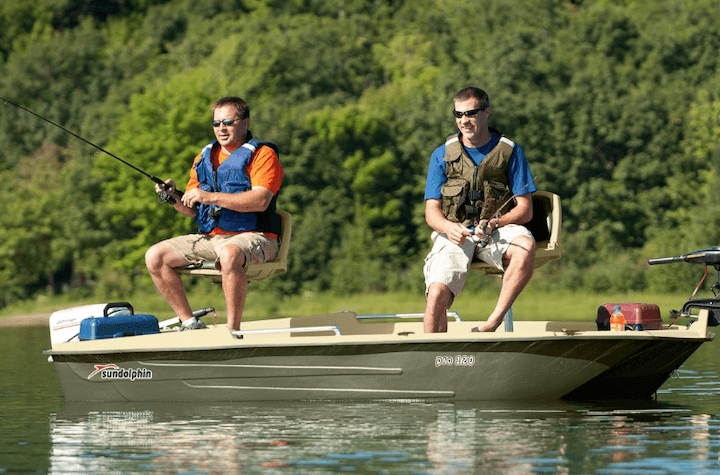 The Sun Dolphin Pro 120 is an 11’3” two-person rotomolded polyethylene fishing boat which costs slightly less than $2,000 for the boat alone, and with a trailer and a 10-horsepower outboard, can commonly be had for around $5,400 to $6,000. For a cheap boat it’s amazingly well equipped, with two swivel seats, fore and aft decks with integrated stowage compartments and hatches, an aerated livewell, built-in rodholders, a fused control panel, navigation lights, and pre-wiring for an electric trolling motor.

The Pro 120 has a tri-hull design which is extremely stable for its size, and will prove perfect for an angling couple headed to the lake. Added bonus: the polyethylene hull material is virtually indestructible, and will bounce right off of hard objects like rocks and pilings. 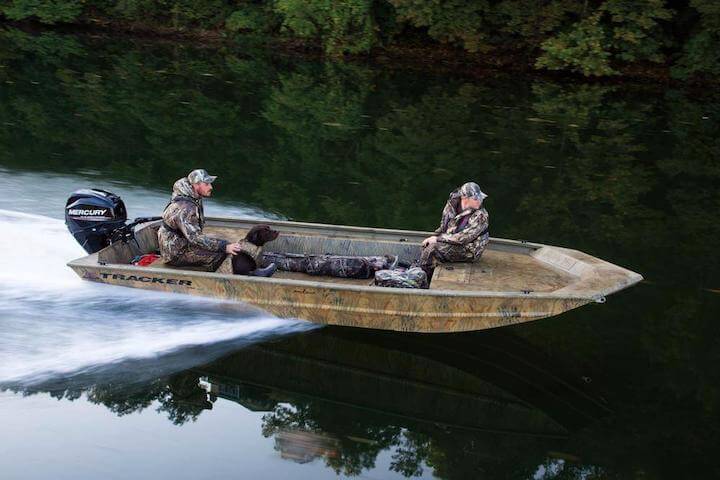 One of the biggest boats you can buy that still qualifies as cheap is the 17’1” long, 6’6” wide Tracker Grizzly 1754 Jon, which costs just a hair over $7,000 with a trailer. You can complete the package by adding a 15-hp outboard (which generally costs a little less than $3,000) and while the boat won’t exactly be a speed demon, you’ll be able to get on plane with a couple of people aboard.

This model has a lockable bowdeck compartment, 0.10” thick aluminum plating in the hull and a 0.190” thick aluminum deck, a seven-degree modified-V hull, and the interior is coated in textured Sure Tread. Thanks to its relatively large size, this boat also offers among the largest capacities in this roundup with the ability to haul up to six people.

No matter what your financial status may be, there’s a very good chance that you’ll find one or more of these cheap boats affordable. And don’t forget, if the finances are tight or you just feel like making an extra buck or two you can always rent your boat to help cover the cost of buying it.

Editor’s Note: Pricing is accurate as last date of publish, May 3, 2022. Please contact each boat manufacturer or your local boat dealer directly for the most updated pricing.

The post 10 Cheap, Affordable Boats for 2022 appeared first on Boatsetter.