Mark Grey was sitting in his office in Seattle when he saw something in the water in the marina right outside his window. It was an oil slick.

“We really panicked, thinking it was a boat losing its fuel,” he remembers. Since his company manages the marina on Lake Union, he and his partners ran out the door. To their great surprise, however, the slick wasn’t from a yacht. It was from a catch basin in a parking lot adjacent to the lake. A pipe was sending street runoff and storm drain water straight into Lake Union, untreated.

“That was my ‘aha’ moment,” Grey says. Being in the building and development business, he thought, “Is there something we can do about this?”

That question was the genesis of what shortly thereafter became Clean Lake Union.

What is Clean Lake Union? 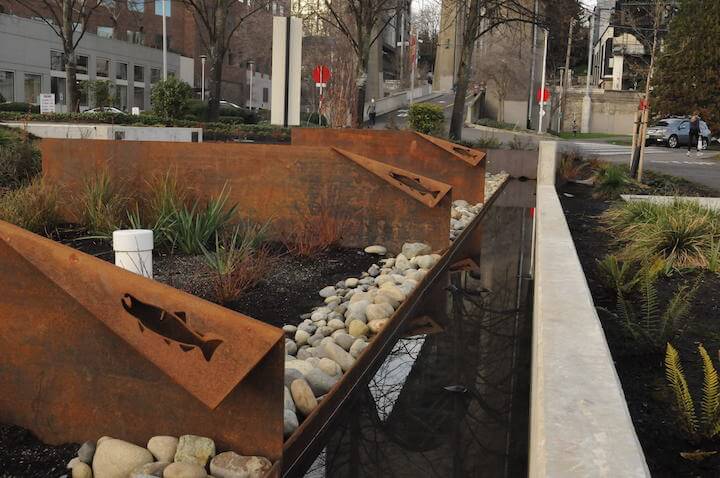 A Seattle native, further raising his family in Seattle, Grey knew back in 2012 that the city had been growing and changing tremendously.

“I guess I always thought there was some fancy filtration system that would prevent this from happening,” he says. “The answer is no. Seattle has a really old plumbing system, if you will.”

Specifically, he continues, it has dedicated plumbing for stormwater, a separate one for sewage, and yet further plumbing for a combination of the two. Despite the increase in development and corresponding increase in sewage, “we haven’t changed that system in the ground,” Grey notes. “It’s been in the ground for decades and decades.” Therefore, he says, the system can’t handle it, and overflow from the combination pipes pours into the lakes.

Clean Lake Union’s first opportunity to make a difference came with a building Grey’s company was developing alongside the Aurora Bridge. The historic bridge, passing over part of Lake Union, was contributing to a deadly problem. A friend sent Grey a video of Jennifer McIntyre, a professor at Washington State University, showing how bridge stormwater runoff killed migrating juvenile salmon “within minutes” of passing by the outflow pipe. It disturbed him to see water akin to black coffee, “a toxic soup,” pouring into the narrow cut of the lake. McIntyre also had research proving that “greening” the infrastructure would reverse the damage.

Grey’s company, therefore, designed a series of bio swales, one leading into the other, as part of its project. It further designed downspout-like structures off the bridge.

“Each time, nature is cleaning the water,” Grey explains. By the time the water reaches the last swale, it’s clean enough to go straight into the lake.

This simple solution initially ran into complications, though, due to conflicting jurisdictions. The state of Washington, for instance, controls the bridge. The land, meanwhile, is under Seattle’s control.

“It took a long time. A lot of people said, ‘You can’t take state water and put it on city property privately, clean it, and then discharge it back into our system!’ And we were like, ‘Why not? It’s going to the same place.’ After asking ‘why not?’ a lot, we got everyone nodding their heads.”

Finished in three phases through 2020, the downspouts and bio swales capture and clean an astounding 1.8 million gallons of water annually. 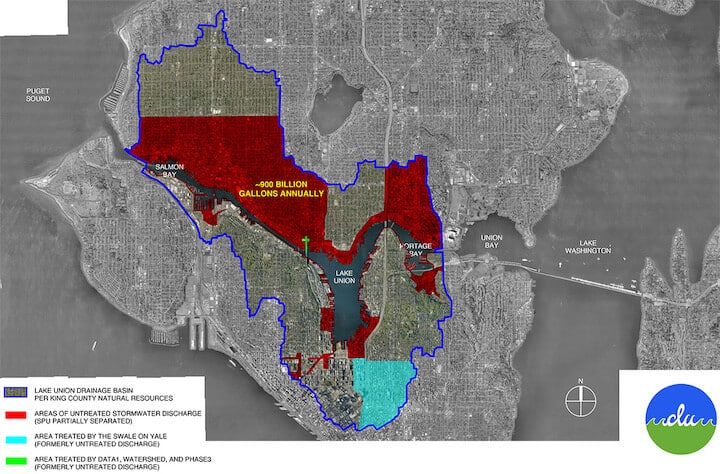 Clean Lake Union continues to identify areas of improvement around the lakes. It has earned not only the cooperation of the public and private sectors but also fellow non-profit The Nature Conservancy. Additionally, it works with Salmon Safe, one of the nation’s leading ecolabels. Salmon Safe certifies that development projects protect water quality, maintain watershed health, and restore habitat.

Grey is immensely proud that natural solutions are the answers to manmade problems. “What’s so cool about this is that a five-year-old gets it,” he says. “There’s science to it, but nature’s doing its job.”

Ultimately, he believes other communities can help nature do its job, too. “Nationally, the greatest form of flattery would be trying to do the same things,” Grey says. “Look at your heavily trafficked areas,” he encourages. From oil dripping off cars to bridges decaying, all of that ends up in waterways.

“We called it Clean Lake Union, but the overarching umbrella is Clean All Water,” he asserts.

Read other stories within our #MindYourWake Series: